Which Language Has the Most Words? 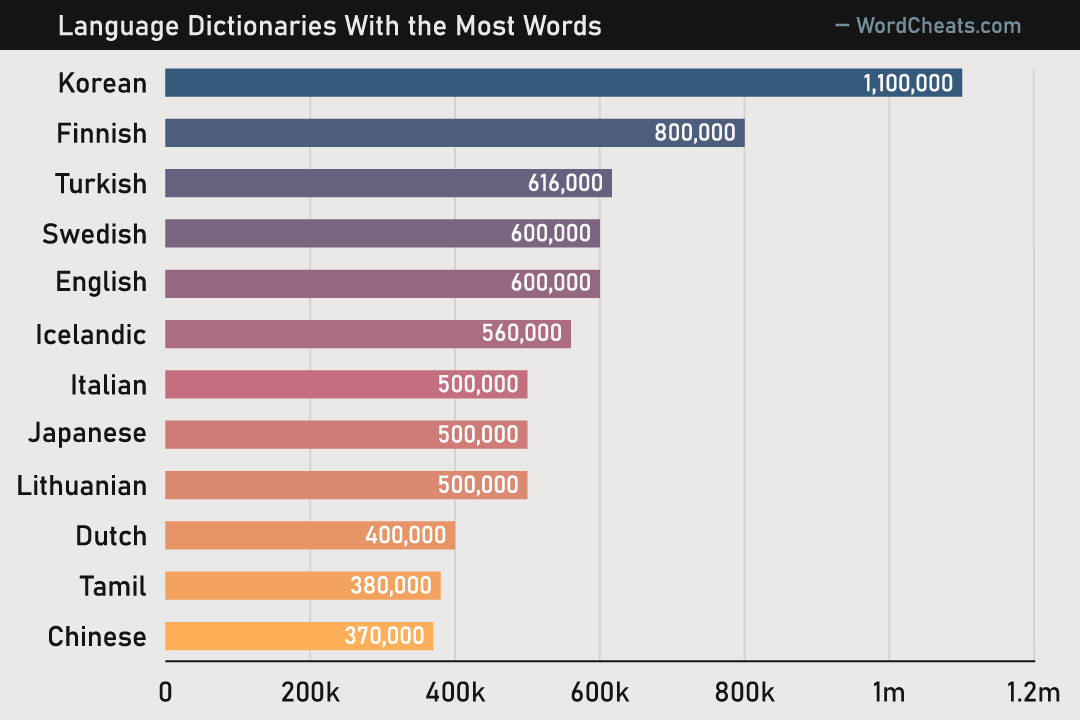 There are over 7,000 languages in the world. And rightfully so, some say it's impossible to know exactly which language has the most words.

This is because it can be difficult to really classify what a word should be in all these different languages.

For example, in English, there is one word for the animal cat. In Spanish, there are two different versions of the word cat being gato, the masculine version, and gata, the feminine version.

However, there are some other ways to closely determine this answer with one, in particular, being dictionaries.

In this case, we will be using Wikipedia's "List of dictionaries by number of words" to explain the top 12 languages with the most words based on their dictionaries.

With over one million words, the Woori Mal Saem is an open online dictionary that includes dialects of both North and South Korea. One of the reasons Korean has so many words is because of how specific each word is.

For instance, in English, we use two words to say "my cat" or "some cat." In Korean, it would be a single different word for each one. So instead of only using the word cat, they have two specific words that mean "my cat" and "some cat" separately.

Finnish coming at number two is no understatement. In its online dictionary RedFox Pro there are 800,000 words with 300,000 in the free version. One reason Finnish has so many words is that it does not have any prepositions.

Instead, they connect endings to the body of the word. So like Korean, "a cat" would be one specific word. There are also many compound words that can get pretty long.

Büyük Türkçe Sözlük, the official Turkish dictionary, holds over 600,000 words. It was created by the body of the Turkish language known as The Turkish Language Association which was founded in 1932.

The Svenska Akademiens ordbok is created by the Swedish Academy is comparable to the Oxford English Dictionary.

Starting more than 150 years ago, The Oxford English dictionary also comes in at 600,000 words.