Check out our new > Advanced Wordle Solver < to make your game even easier!

The following words are the best starting words to use in Wordle: OATER, ORATE.

Wordle has a set word list. Certain letters appearing more often in the English dictionary doesn't mean they appear more often in Wordle. The words above are two of the best starting words to use in Wordle due to how often the letters appear in their specific list of words used in the game.

How To Play Wordle

Guess any 5-letter word you can think of. It doesn't matter what the word is, but there are some better words to start with, such as words like ORATE that contain multiple letters that are common in all words. 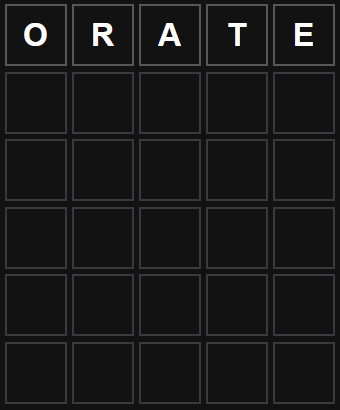 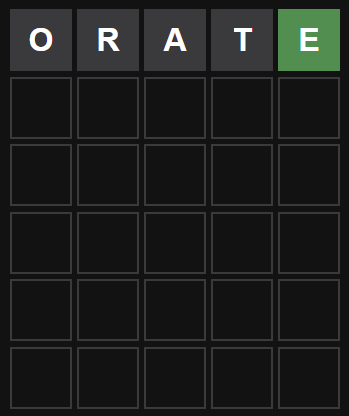 Using the information you've gathered, guess a new word using available letters remaining and letters you know are in the word. 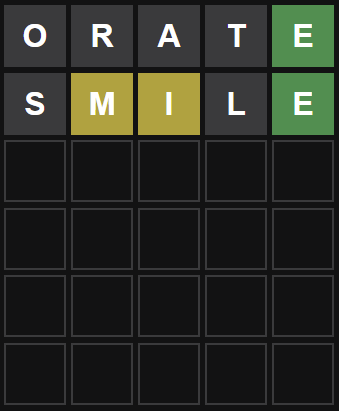 Repeat the previous steps over and over until you either find the word or run out of guesses. 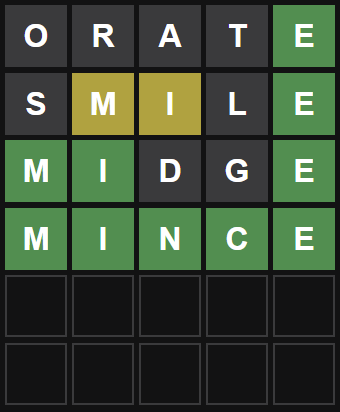 Wordle is a super fun, new Word game with a simple objective: find the hidden word. This game could be compared to Hangman, as it's a similar concept, but with a unique twist that makes this much more fun for a majority of people. The game is even played somewhat similarly: you guess words and find out which letters are wrong or right so you can narrow down your answer.

What is the best starting word for Wordle?

The best starting word for Wordle will typically be OATER or ORATE. This is because of the incredibly high frequency of the letters A, E, O, R, and T in the dictionary that Wordle uses. While the answer will likely not be either of these words, you'll get a fairly good idea of what letters are present and what letters are not.

How do I play Wordle?

Yes! There are a few important things to keep an eye out for when it comes to guessing. If you guess L, you may see that it's yellow. This means it's in the word but in the wrong spot. However, it could possibly be in two different spots. If a letter is green, you still may be present in another spot as well.

Yes! Wordle is a free game, run by New York Times, that allows you to play every day with your friends and family. Even though they have not revealed any intention on making the game cost money, there is also no guarantee that it won't cost money in the future.

Does everyone have the same Wordle answer?

Yes! Regardless of where you are in the world, you will be trying to guess the same word as everyone else for the day. This helps create a fun, friendly competition to see who can guess it first, and in less tries.

Should I use this Wordle Cheat tool?

That's up to you! Wordle can be quite difficult some days, and our tool is designed to help you avoid having to stress over whether or not you're going to be able to find the answer. If you want a higher chance (nearly 100%!) of getting the word correct, your tool will help you get there. Otherwise, you can avoid using our tool to try and get find the answer on your own.

About Our Wordle Cheat Tool

Wordle is a trendy new word game that seems to have taken the world by storm. It has become so popular that the New York Times decided to purchase the game from its developer. It's safe to say that if the New York Times is interested in your word puzzle game you developed, you made a good one!

There are plenty of good starting words such as ARISE, AROSE, SOARE, STARE, and TEARS. Each of these words uses letters that are very common in other words as well. Even though it's unlikely that any of these words will be your answer of the day, they'll typically narrow down at least 2 letters for you.

Another unique aspect of Wordle is that it's simply a daily game you play for just a couple of minutes. Instead of focusing on consuming your time all day, or getting you to come back several times a day, it gives you a single word to guess once every 24 hours. This means you can get your brain kickstarted in the morning with a quick match and get right into the rest of your day.

Wordle is a surprisingly fun game to play despite its restriction to one word a day. It has even caused several clones of the game to be created, including versions that let you play as much as you want in a day by presenting you with different words each time. These are great options to look at if you're wanting to spend more of your day wanting to find that new Wordle word.

To play the game, you're presented with empty spots and letters. You put in letters (or rather, a word) to guess. If you get any letters right or wrong, the game will tell you. A letter will also fade altogether if that letter isn't found anywhere in the word, so you know which letters to not try putting anywhere again.

You have a limited number of guesses and often the first guess is the hardest because you have no idea what letters could be present in the word. Don't worry, we're here to help you through the puzzle as easily as possible!

We also have the Wordle answer of the day right below our tool toward the top of this page. Today's Wordle answer won't be the same as yesterday's or tomorrow's, so be sure to keep up with the daily change of answers.

If you haven't played Wordle yet, there's a few ways you can play it now. You can head over to this link: Wordle.

In Word Tactics, you are pitted against another person. One person goes first and makes their guess. If they don't get the word right, the next person gets to see what the previously guessed letters were, as well as which letters are correct, not in the word, or are in the word but in the wrong spot. This means you need to be careful with incorrect guesses because you will reveal more information to your opponent.

This may seem like whoever goes second gets an innate advantage, but there's two main reasons this isn't necessarily true. The first reason is that the game unveils the first letter at the beginning so no one needs to guess it. The second is that a person is highly unlikely to guess a word on their first try. You'll find that this game seems relatively fair overall. The game also plays in multiple rounds, so if you don't go first one round, you'll go first the next.

Another part of Wordle that exists in there is still the aspect where no one guesses correctly. If you and your opponent both fail to guess the word correctly, then no one wins the round and instead, everyone loses.

Word Tactics is available on the iOS App Store.

Quordle is one of the most popular Wordle-like games that isn't Wordle itself. It's like Wordle, but if you were playing it four times at once. That's right, you have to guess four words instead of one in order to win.

Making sure you understand Wordle itself is important to being successful in this game, so scroll up to see how to play Wordle before trying this game out. Once you've got it down, go ahead and take your first, crazy attempt at this game. Note that you will likely lose your first match, but that's okay! You're learning!

In Quordle, you're trying to guess four words before you run out of guesses. The catch is that the word you guess applies to all four words you're trying to find. Then each section of your screen will display the correct/incorrect letters as Wordle does. Once you guess one of the words, you no longer have to worry about making guesses to account for it.

To make up for this increased difficulty, you do get a few more guesses than the normal amount that Wordle offers, but it's not a lot more guesses, so tread as carefully as possible!

Try using our Wordle cheat tool for this game too, as you might need it more than most of the other Wordle-like games.

Wordle Unlimited is a super popular version of Wordle for one simple reason: you can play unlimited times! That's right, no longer must you wait an entire day just to play the game you love more. Instead, you can play all day long, if that's what you want to do!

Wordle Unlimited can be played on the offical Wordle Unlimited website. It's a great option for all you Wordle lovers out there who just want to play the game a bit more.

One difference that exists in this game compared to the official Wordle game is the dictionary usage. You can expect to see any words you see in Wordle, but this game has a more extensive dictionary, probably due to being able to play forever. As a result, you will sometimes see words that are less common, even words that you may not know what are. So be prepared!

Another option for the harder words is to use our Wordle cheat solver tool. Just like most other Wordle games out there, you can use our cheat tool to find the answer by eliminating words that couldn't possible be the answer. We also display a list of words for you to see what possible words could work out. That way you can spend a little less time thinking so hard and trying to remember all the words you've ever heard.